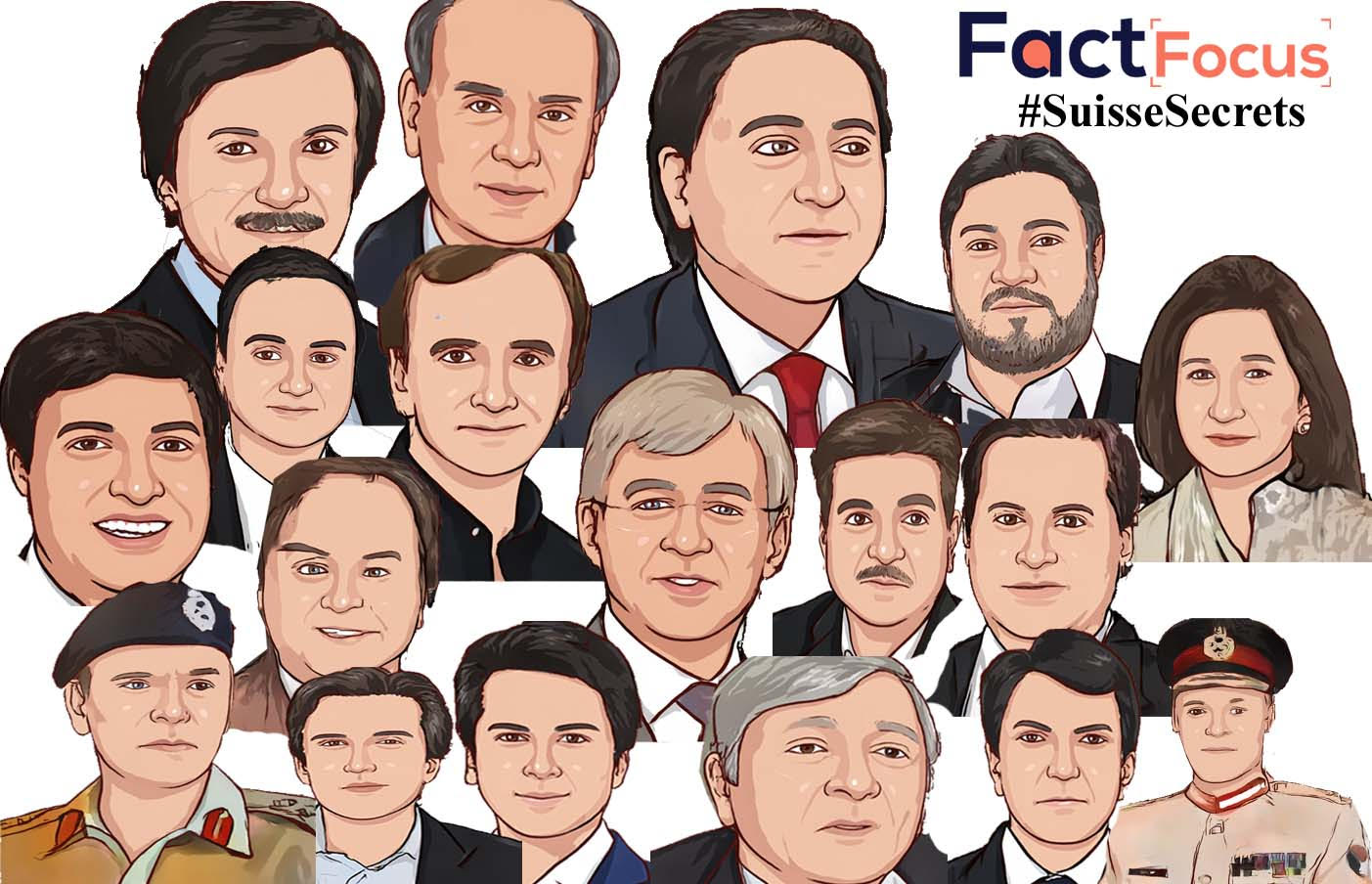 The two Pakistan army generals named in the #SuisseSecrets were closely related to each other and were known as two important members of “the gang of four”.

General Akhtar Abdul Rehman and General Zahid Ali Akber were part of the infamous “The Jalandhar Group” or “The Gang of Four” which was also part of the coup which overthrew Prime Minister Zulfiqar Ali Bhutto’s democratic government and later hanged him through the judiciary to have smooth sailing.

The other two officers of this ‘The Gang of Four’ were General Zia ul Haq and General Rahimuddin. All these four were closely related through the marriages of their children. General Akhtar Abdul Rehman’s son Akber and General Zia’s son Ijaz ul Haq are married to the daughters of General Rahimuddin. General Rehman’s son Haroon Akhar is married to the dauther of  General Zahid Ali Akber.

Though mentioned as an isolated character in the #SuisseSecrets , General Zahid Ali Akber, is the father-in-law of Haroon Akhtar Khan (also mentioned in the #SuisseSecrets), whose father, General Akhtar Abdul Rehman was the Director-General of ISI. General Rehman handled the CIA money in 1980s and has been accused of siphoning money from Afghan War project of American CIA. In 1985, the bank accounts opened at Credit Suisse in Switzerland in the names of General Rahman’s three sons, Haroon, Akber, and Ghazi. Huge sums of money were stashed in those accounts while their father was the DG ISI.

The OCCRP’s #SuisseSecrets investigation has also verified the old US paper’s report that the “CIA’s covert Soviet war aid had made rich sugar daddies out of Pakistani generals.”

General Akhtar Abdul Rehman’s three sons have been named in the #SuisseSecrets for opening Swiss accounts during the Soviet-Afghan war in the mid-1980s. General Akhtar, besides heading ISI, also headed the five-member committee that directly dealt with the CIA’s money to supply weapons to the mujahideen fighting against the Soviet Union in Afghanistan.

The title page of a NAB investigation against General Zahid Ali Akbar, shows details of his relationships with General Akhtar Abdur Rahman family and the Barki family of Lahore

General Rehman assumed the office of DG ISI in June 1979, soon after the Afghan-Soviet war erupted. Coincidently his son, Haroon acquired the Canadian Nationality the same year. The dates of foreign nationalities acquired by other sons are not confirmed but according to the bank data, all the sons of General Rahman were Canadian nationals.

In the OCCRP Credit Suisse #SuisseSecrets investigation, General Akhtar’s two family accounts have been revealed, one of which was jointly held by General’s sons Akbar, Ghazi, and Haroon. This account was opened on July 1, 1985. “By 2003, this account was worth at least five million Swiss francs ($3.7 million at that time). A second account, opened in January 1986 in Akbar’s name alone, was worth more than 9 million Swiss francs by November 2010 ($9.2 million at the time)”, OCCRP’s report mentioned.

General Akhtar Abdul Rehman died along with General Zia-ul-Haq, the dictator, in a plane crash in August 1988.

The US media had been reporting in the late 1980s that Pakistani Generals were filling their own pockets from the American taxpayers’ money allocated for the Soviet-Afghan war. General Rehman was specifically mentioned by the Washington Post in a May 1987 report but neither did General Rehmannor any of his acquaintances face any inquiry over alleged swindling of CIA’s aid.

In a May 8, 1987 report by Washington Post, titled Afghan Rebel aid Enriches Generals, the authors Jack Anderson and Dale Van Atta mentioned, “The Central Intelligence Agency has spent $3 billion on arms for Afghan rebels — half of it put up by U.S. taxpayers. Yet not a single American decides who gets the weapons. The CIA leaves those decisions to a secret five-member directorate of top Pakistani officials, who have their own agenda. This means the CIA’s largest covert aid program since Vietnam has made rich sugar daddies out of Pakistani generals.”

‘For several years, those decisions were made by a five-member committee comprising of Maj. Gen. Akhtar Abdul Rahman, head of ISI; Gen. Rahimuddin, chairman of the Pakistani joint chiefs of staff; Gen. Fazal Haq, the former governor of Peshawar, and Foreign Minister Yaqub Khan’, the paper had pointed.

While quoting CIA sources the US paper wrote that Intelligence sources (including CIA officials) and Pakistani sources charge that some Pakistani soldiers have become rich in the process.

On the other hand in the 2000s National Accountability Bureau started investigating Gen Zahid Ali Akbar (father in law of Haroon Akhtar). The retired General opened an account with Credit Suisse during the investigation in 2004 and NAB remained unheard of it. The account was closed in 2006 and before its closure, the account held the maximum balance of 15,535,345 Swiss Francs. The NAB had dug out 77 accounts associated with Zahid Ali Akbar and multiple properties which were owned by him and the family members.

In response to questions by OCCRP, Zahid Ali Akbar confirmed he opened the account in that period but said the funds didn’t originate in that period. “All funds stand declared to the tax authorities in Pakistan and the tax stands duly paid there on as per law,” he said but didn’t respond when asked why NAB couldn’t trace this account then.

General Zahid oversaw the construction projects of Kahuta Research Laboratory and General Headquarters in the late 70s before he headed Water & Power Development Authority and Pakistan Cricket Board. Zahid Ali Akbar had struck a deal of plea bargain with NAB and paid Rs 200 million in 2015.

Anchorperson Rana Mubashir and his wife Irum Mubashir also opened a bank account in Credit Suisse on October 03, 2008. The account had a maximum balance of more than one million dollars in May 2010. The account was closed on November 29, 2011. Rana Mubashir hasn’t responded to the queries sent to him by OCCRP.

Senator Gulzar Ahmad Khan (late) and his two senator sons Senator Waqar Ahmed Khan and Senator Ammar Ahmad Khan family opened an account at Credit Suisse in 2008. They held 9,786,955 Swiss Francs in it. The account was closed in 2013. This account remained unheard from FBR and the Election commission of Pakistan. Questions were sent to senators but they were not responded to.

The other clients of the Swiss bank also include Punjab’s Finance Minister, Makhdoom Hashim Jawan Bakhat, and his brother Omer Sheharyar. They maintained a bank account for 11 months from 2011 to 2012. A sum of 2,765,038 Swiss Francs rested in this account.

Senator Haji Saif Ullah Khan Bangash, a PPP senator (now deceased) maintained a maximum balance of 105,137,413 Swiss francs millions in 2009. NAB has filed a corruption reference against Bangash on bank fraud charges in 2010. Bangash’s sons, Shuakat Ullah Khan and Kifayat Ullah Khan were co-accused in this NAB reference. Kifayat UllahKHanis banker based in Geneva. This account was opened on November 03, 2008, and was closed on December 21, 2011. While the NAB did nothing in this case, Bangash bought majority shares in Silk Bank which was owned by current federal finance minister Shaukat Tareen.

The name of Sultan Ali Lakhani of Lakson Group who also owns Express Media Group has also surfaced in the #SuisseSecrets. Sultan along with Zulfiqar Lakhani and Amin Muhammad Lakhani held 10 individual and joint accounts with their immediate family members between 2001 and 2010. This was soon after the loan settlement agreement reached with the National Accountability Bureau that would require them to pay Rs 1.12 billion. Cumulatively, they held almost 58, 626, 841 Swiss Francs (Around 60 Million dollars) in their accounts. Besides the three above-mentioned Lakhanis, others named in the Data Leak include Gul Bano Lakhani, Alizeh Lakhani, Anusha Lakhani, Fatima Lakhani, Anika Amin Lakhani, Saira Amin Lakhani, Babar Ali Lakhani, Bilal Ali Lakhani, Misha Lakhani, Shaista Lakhani, and Clinton Raven.

In 2000, Sultan Ali Lakhani and Amin Muhammad Lakhani were arrested by the NAB and an investigation was carried out into the affairs of Lakson Group and their Bai-Nami/ shell companies.

According to NAB’s initial reports, the modus operandi of the Lakson Group was to incorporate/establish the company either initially in the name of their employees and later take over the company by changing the Directorship from employees’ names to their own or to keep the shares of the company in their employees’ names and subsequently through gift deeds or other ways transferred the shares in their names or their family members names.  For example M/s. Merit Packaging Limited was initially established in 1980 in the names of its employees. They included Mr. Rahatullah Khan, Aziz Ebrahim, M. Rafi Chawala, Ismail Tily, and Shahid Ashfaque.

Subsequently, in 1985, the directorship of the company was changed and all the Lakhani brothers became the Directors of the company. It was alleged that the group would siphon off funds and loans through shadow companies.

The Swiss accounts were all shut down in 2015. Lakhani brothers didn’t reply to requests for comment.

The OCCRP data shows that the Schon family also held two Swiss accounts. The first account was opened on November 07, 2001, when Nasir Schon and his brother were facing a loan default case. This account remained operational until September 10, 2010, and had a maximum balance of 477,140 Swiss francs. Another account was opened on August 05, 2010, and remained operational until January 01, 2015, and it has a maximum balance of 1,023,261 Swiss francs in September 2010. Responding to OCCRP questions, Schons acknowledged they held the accounts and said there was nothing wrong with it. They said they faced political victimization from 1996 to 2005 through the accountability apparatus and shared a document signed by the NAB prosecutor general which said the accused (Schon brothers) were not indulged in acts of corruption and asked the court to dismiss the charges. Another NAB document, however, shows that the prosecutor general of the bureau made this declaration in exchange for the Schon family’s agreeing to repay their bank loans.