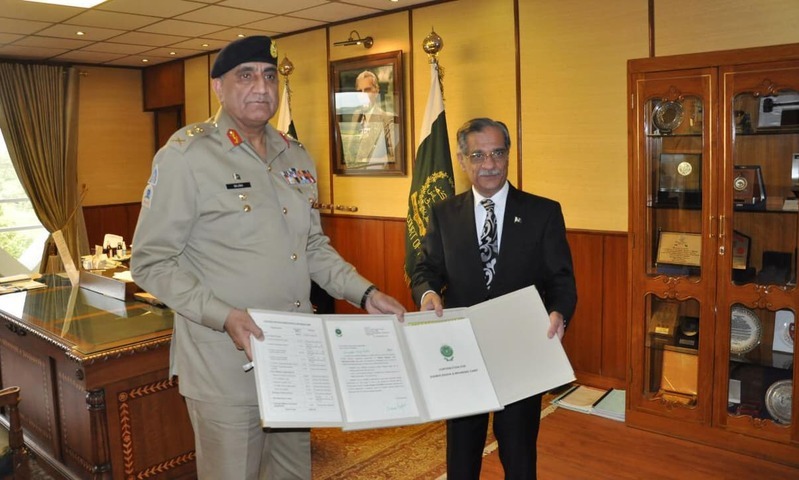 Institutions have asked to do so. Whether it is fair or not, it has to be done, Justice Nisar passed instructions

The then Chief Justice Saqib Nisar denies issuing these instructions to any judge of the accountability court or any other relevant person, says the army, ISI never pressured or even contacted him

The then Chief Justice of Pakistan Saqib Nisar was the person who passed on the directions of handing down conviction to Mian Nawaz Sharif and his daughter, Maryam Nawaz only because the “institutions” wanted the former PM penalized in order to bring ahead Imran Khan, reveals leaked audio of his conversation.

The term ‘institutions’ is colloquially synonymous with the military establishment also referred to as the deep state which consists of elements from the Pakistan Army and Inter-Services Intelligence (ISI) both of which are subordinate departments of the Ministry of Defence.

Fact Focus obtained this audio some two months ago and had it examined by a leading American firm specializing in multimedia forensics. Garret Discovery has a team of leading experts who have a long experience of analyzing and presenting evidence and testifying before courts in the US. The firm’s analysis report certifies the integrity of the audio file and states that “this audio has not been edited in any way”.

The recording starts with the then Chief Justice of Pakistan sharing something he would never admit in public that the decisions announced in the courtrooms are dictated by institutions. Content of the conversation and the instructions conveyed by the former Chief Justice suggest that the recording dates back to the time when the cases against Sharifs were under trial in the Accountability Court before the general elections of July 25, 2018.

Chief Justice Nisar instructed that Mian Sahib (Nawaz Sharif) and his daughter (Maryam Nawaz) must be sentenced even though it is unfair. “Whether it is fair or not, it has to be done,” he conveyed to the person on the other end. “Regardless of the merit, we will have to do it (sentence Nawaz Sharif), and even to his daughter”, Justice Nisar was very clear in his tone. When that person objected that a sentence cannot be passed against the daughter, Chief Justice Nisar replied, “You are absolutely correct. I did talk to “friends” that something be done about this but they did not agree”. He went on to say, “there will remain no independence of the judiciary, so let it be”.

While speaking to Fact Focus, Justice Saqib Nisar said that he never contacted any judge of accountability court to order him to pass any verdict against Nawaz Sharif or his daughter. “Why I would do that,” Saqib Nisar questioned adding “I have no grudges against Mian Nawaz Sharif.” He said that no one from the Pakistan Army or the ISI ever contacted him or pressured him on this count.

An English translation of the conversation is as follows:

Saqib Nisar: Let me be a little blunt about it; unfortunately, here it is the “institutions” who dictate judgments. In this case, we will have to penalize Mian Sahib.

And “they” say “we shall bring Khan Sahib”.

Regardless of the merit, we will have to do it, and even to his daughter.

Other person: But, in my view, his daughter doesn’t merit a sentence.

Saqib Nisar: You are absolutely correct. I did talk to “friends” that something be done about this but they did not agree. There will be no independence of the judiciary, so let it be ……..

Background of the Panama Case and the references emanating out of it:

– April 03, 2016: International Consortium of Investigative Journalists (ICIJ) released Panama Papers, a database of offshore companies set up in different offshore jurisdictions. These companies were owned by thousands of citizens of numerous countries including some 455 Pakistanis. Four companies were linked to family members of Nawaz Sharif, the then Prime Minister of Pakistan.

– April 05, 2016: Opposition parties including Pakistan Tehreek-e-Insaaf (PTI) launched and nation-wide campaign against the government, and PTI chief Imran Khan stated on Twitter, “Only reason people open offshore accts through Panama is to either hide wealth, especially ill-gotten wealth or to evade tax or both.”

– April 05, 2016: The government announced to set up a judicial commission to probe allegations against the members of the Prime Minister’s family. However, an agreement could not be reached between the government and opposition as to the terms of reference of such commission hence the idea had to be scrapped and the matter was finally referred to the Supreme Court.

– August 30, 2016: PTI and other opposition parties moved before the Supreme Court for the disqualification of Prime Minister Nawaz Sharif on the basis of reports in Panama Papers.

– February 23, 2017: Five-member Supreme Court bench concluded the hearing in the Panama case and reserved its judgment.

– April 19, 2017: Supreme Court announced its judgment. Three judges Justice Ejaz Afzal, Justice Sheikh Azmat Saeed, and Justice Ijazul Ahsan ordered the constitution of a Joint Investigation Team (JIT) to find a definitive answer to the question of whether the allegations against the prime minister were true or not. A “monitoring bench” consisting of these same judges was constituted for the monitoring of the JIT to be nominated by the Chief Justice of Pakistan. The remaining two judges Justice Asif Saeed Khosa and Justice Gulzar Ahmad in their minority judgment ordered the disqualification of Prime Minister Nawaz Sharif.

– May 03, 2017: The monitoring bench of the Panama JIT rejected the names of the officers recommended by the State Bank of Pakistan (SBP) and Securities and Exchange Commission of Pakistan (SECP).

– July 10, 2017: JIT submitted its report to the Supreme Court which was uploaded on its website soon thereafter.

– July 28, 2017: Supreme Court announced its verdict disqualifying Prime Minister Nawaz Sharif for failing to disclose in his election returns, an undrawn salary from his son’s company in JAFZA, Dubai, and ordered the National Accountability Bureau to file references against Nawaz Sharif and his family members. In turn, the Supreme Court also ordered the Accountability Courts to decide the cases in a period not exceeding six months. Justice Ejazul Ahsan of the Supreme Court who sat on both Panama and the Monitoring Bench was nominated monitoring judge to monitor and oversee the compliance of the order both by NAB and Accountability Courts.

– June 10, 2018: The accountability court was unable to complete the trial of the first case against Nawaz Sharif and his family members and sought additional time from the Supreme Court. A two-member Supreme Court bench headed by then Chief Justice Saqib Nisar gave only four weeks to the accountability court and ordered that judgment must be announced before July 10, 2018 (General Elections were on July 25, 2018). Justice Nisar directed in his written order that the accountability court may continue its proceedings even on Saturdays in order to complete the proceedings before July 10, 2018 (15 days before the general elections.).

– July 13, 2018: Nawaz Sharif who along with his daughter Maryam was in London returned to Pakistan; both were arrested by Rangers at the Lahore airport.

You can change the size of the timeline and can check the details of any specific event by clicking on it.