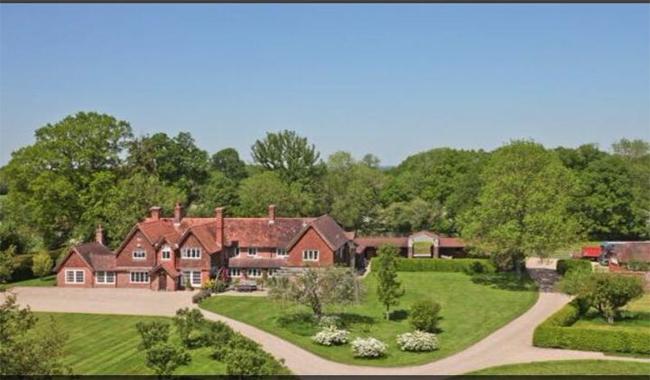 ISLAMABAD: Finally, PTI leader Jehangir Khan Tareen has admitted to having an offshore company registered in the name of his four children who own property in the UK and the offshore company linked with this property is managed through a trust.

Jehangir Tareen made the revelation while talking to The News at his residence on Friday.Tareen was the federal minister for industries and production in the cabinet of General (retd) Pervez Musharraf.

“I do not own any offshore company in my name,” Tareen said adding, “All my children are grown up and independent, so the ownership of UK’s foreign property and offshore company linked with it could not be declared under my name.”

On a question as to why his family was having offshore companies, Tareen replied it was must for the management of assets in the UK as serious problems regarding inheritance of the property could emerge in case of any untoward situation. “If same is not done through offshore companies being managed through a trust, a big money has to be paid in form of taxes to the UK government and the property has to be surrendered to the UK authorities because the laws regarding inheritance are different there,” Tareen explained.

Tareen said that his four children had property in UK and he had sent money outside the Pakistan through legal banking channels. He provided The News two documents regarding transfer of money from Pakistan to UK. One document shows that Jehangir Tareen sent 200,000 pound on September 18, 2014 through HBL Corporate Center Lahore to his son, Ali Khan Tareen. The other document, however, shows that Tareen sent 250,000 pound on May 25, 2011 through the same channel to a company ‘Shiny View Limited.’ However, Tareen didn’t disclose exact location of property in UK and the name of offshore company in the name of his four children saying he could not recall name and that he would have to check.

Later, in a written reply to The News questions seeking details about exact addresses of the properties, name of of offshore company and name of trust, Tareen promised to provide information later. In the written reply, Tareen maintained that his children own one house which is funded with white money sent abroad legally. He said that he had declared all his property details in his press conference and had challenged Prime Minister Nawaz Sharif to do the same. “The real story is about him not me,” Tareen said while referring to the prime minister in his written response and adding, “Focus should be on what he should do or shouldn’t do. He is in the dock not I.” Tareen further said in his written reply that Nawaz Sharif should tell how much tax he had paid. “I have paid more than Rs270 million as personal tax during last five years. My company paid Rs1.83 billion as corporate income tax during last five years,” Tareen wrote in his reply and added, “Ask Nawaz and Shehbaz, who are richer than I, how much taxes have they paid and how much is paid by their companies.”

When The News contacted a senior tax and audit expert affiliated with a multinational company, he stated on condition of not to be named that complete details of any property owned outside the country, while living in Pakistan, had to be declared. He said if properties owned by offshore companies and being managed through a trust, every detail needed to be declared and if some did not do that, it would mean that he hadn’t declared his assets completely. He said that trusts were used to manage properties but beneficial owners of the trust properties and linked companies needed to declare everything.

The PML-N leader questioned exactly how much money was sent abroad by Tareen. He said over Rs130m given by Tareen to each of his children are not sufficient to buy a house in a simply good London locality. He questioned when Tareen sent these monies. The PML-N leader said that channels used for sending money abroad by Tareen needed to be thoroughly probed. He question where the properties were situated in UK and why these were purchased through offshore companies. He questioned when offshore companies were set up by Tareen and when the property was purchased in UK. What was the purchase price of the property and whether or not the exact price was declared. Whether or not the properties are on rent. Whether the offshore company also own some other business and if it owns whether or not it was declared. How much money is deposited in bank accounts of the company. The PML-N leader said that Tareen was a top public office holder and all these questions needed answers and it was possible only if an independent commission might conduct an in-depth probe into all transactions and related issues.

PTI chief Imran Khan stated on Twitter on April 4, 2016, after Panama Papers were leaked, “Only reason to open offshore accounts through Panama is to either hide wealth, especially ill-gotten wealth, or to evade tax or both.”

Imran Khan tweeted on the same day, “I appeal to conscience of PML-N voters to ask their leader why his family keeps wealth abroad when he roams world seeking investment for Pakistan?”

PTI chief further tweeted on the same day, “Critical unanswered question is where did money for establishing of offshore accounts come from? Why the contradictory statements from Nawaz Sharif’s children?”

Only a few days back, PTI chief stated that people avoided tax and took money from Pakistan abroad and parked it in offshore companies set up in the tax havens. He said that for making a new Pakistan, leaders must bring their investments back to Pakistan and invest here to the beneifit of the people of Pakistan.

When The News questioned the senior PML-N leader about this statement of PTI chief, he said that to set an example and to make a ‘new Pakistan,’ Imran Khan should ask his party leaders to set an example by bringing money invested abroad. “This step will give weight to the statements of PTI chief and the government leaders, other politicians and businessmen will be pressurised and will be left with no option but to bring their foreign investments back in Pakistan,” The PML-N leader added.