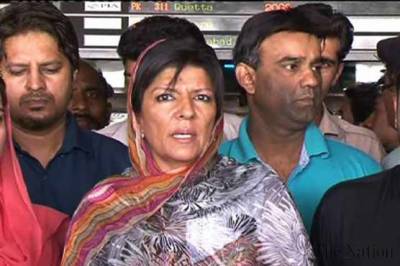 ISLAMABAD: Though Aleema Khan, while admitting ownership of her New Jersey flats, has stated that she has a business of textile which had exports of billions per year, FBR tax record of her business for the corresponding years in which luxurious foreign properties were purchased in UAE and USA belies her claim.

The USA property in New Jersey was purchased by Aleema Khan on August 5, 2004, in the financial year 2004-05, the business CCL paid a total tax of Rs188,721 in this year. The total annual profit of this business was to be divided between two shareholders, Aleema Khan and her business partner. Aleema Khan’s own tax in this financial year was only Rs49,914.

Official documents establish that Aleema’s only business in 1990s and 2000s was Cotton Connections Pvt Ltd. Here is the year-wise breakup of taxes paid by Cotton Connections Pvt Ltd (CCL) from 1995 to 2010 and Aleema’s own taxes in the relevant years of purchase of foreign properties. While going through these tax details, the readers need to keep in mind that the profit declared by the business is combined profit of two shareholders. Readers should also differentiate between situations when the profit was declared and when in accordance with FBR requirements, the annual turnover was declared instead mentioning profit.

Total profit/income of Cotton Connections Limited (CCL) was declared as Rs696,107 and tax paid was Rs1880.

Total profit/income of Cotton Connections Limited (CCL) was declared as Rs175,688 and tax paid was Rs52,452.

Format of the tax forms was changed in this financial year and instead of declaring profit and paying tax on profits, the businesses were supposed to declare total turnover and pay tax on it according to the defined ratio.

Tax record of Aleema Khan available with The News from this financial year onward shows following details of her personal taxes and her total income. By going through her total income and taxes paid by her and her business in preceding and following years, readers can decide by themselves whether Aleema Khan could have bought luxurious properties in UAE and USA.

Aleema Khan paid Rs49,914 as her personal tax in this financial year and declared her taxable salary income from her business was Rs480,000 (Rs40,000 per month). No income was claimed to be exempted from the taxes. She paid Rs470 as zakat on her income in this year.

In this financial year, Aleema Khan bought US property in New Jersey in August 2004.

Aleema Khan paid Rs47,434 tax in this year and declared taxable salary income from her business was Rs480,000 (Rs40,000 per month). No income was claimed to be exempted from the taxes. She paid Rs282 as zakat on her income in this year.

Total tax paid by CCL was Rs188,721 only. The amount of exports turnover is illegible but one can have an idea by comparing tax paid this year with that paid during the preceding year.

Aleema Khan’s tax record for this year couldn’t be retrieved.

And then came the Panama Papers revelations in April 2016 following which The News sent questions to Aleema Khan about her foreign properties in UAE, UK and USA and instead of responding questions, she started selling her foreign properties. She didn’t’ even feel the need to declare the properties which were sold out but now facing a case regarding her undeclared and sold-out UAE property which she has to admit before tax authorities of Pakistan. Only in case of New Jersey property, Aleema Khan was unable to sell it as it was jointly owned by her and her former business partner and her business partner was not ready to sell the same because of a business dispute. Following this, Aleema declared her 75 percent share in New Jersey property through Tax Amnesty Scheme 2018 (Whitening of Black Money Scheme) as after The News questions, a legal action against her hidden and unsold foreign properties was imminent. An investigation about her other sold out undeclared foreign properties is also in progress.

This article, authored by Ahmad Noorani, was originally published on The News on January 19, 2019.
https://www.thenews.com.pk/print/420746-fbr-record-of-aleema-s-business-belies-her-claim-of-huge-income-from-sewing-machines