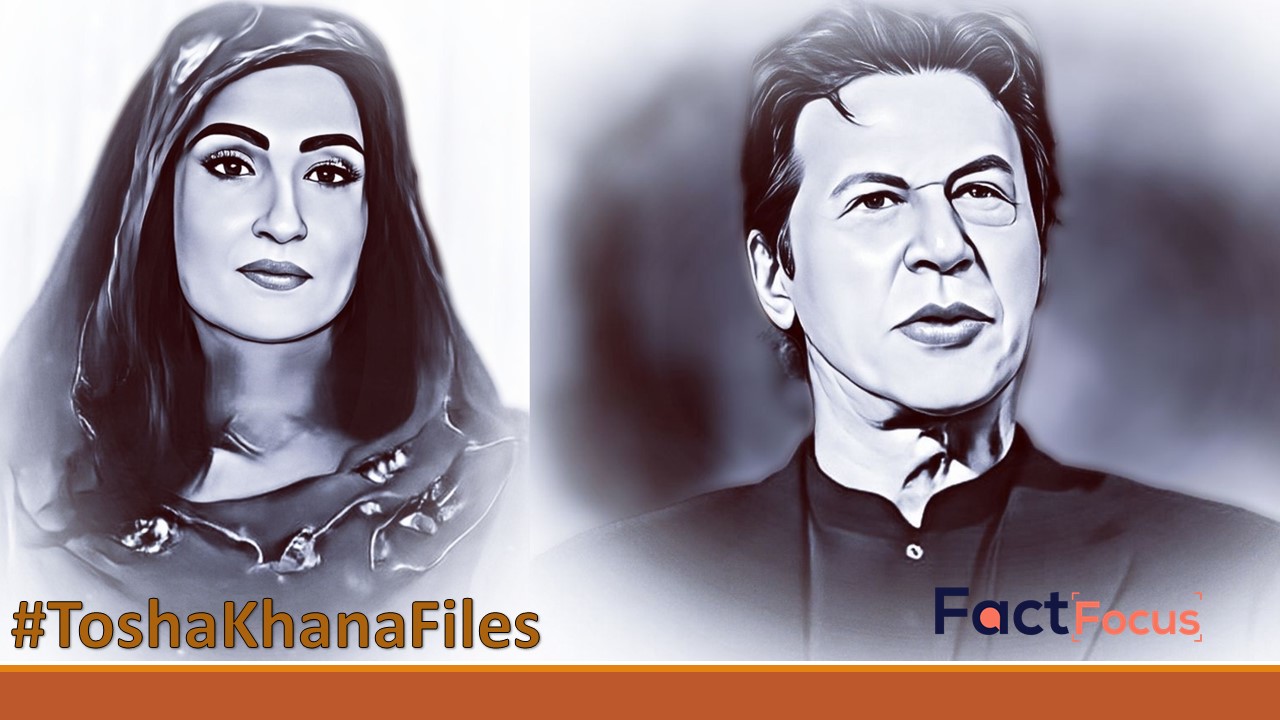 Both Imran and Bushra hid these precious gifts from tax authorities in Pakistan for more than three years until it became scandalous. They never declared all the items.

The prices of the items given in the story are amounts of gifts as assessed by the former Prime Minister Imran Khan’s government.

The former Prime Minister of Pakistan Imran Khan and his wife Bushra Bibi retained all the 112 gifts worth Rs142.02 million from the Tosha Khana of the government of Pakistan by paying less than four caror rupees only, Fact Focus investigations reveal.

From luxurious Rolex and other expensive watches (seven Rolex watches) to gold and diamond jewelry (including multiple necklaces, bracelets, rings, multiple diamond chains), an expensive pen to cuff links worth millions, dinner sets to perfumes, and Oud (fragrance), Imran Khan and his wife took Bushra Bibi retained everything that different states of the world were gifting to Pakistan.

The most expensive watch whose value was accessed at Rs85 million (Eight Caror and fifty lac rupees) by Khan’s own government was gifted to him by Saudi crown prince Muhammad Bin Salman when he visited Saudi Arabia on September 18, 2018, by paying one caror and seventy lac only to retain this precious gift.

According to the known data, this is the most expensive gift given to Pakistan and retained by any Prime Minister in recent history. As revealed by Shumaisa Rehman of Fact Focus her investigation #FerozewalaFiles reported on March 18, 2022, Imran Khan hid these precious gifts from tax authorities in Pakistan. After hiding this precious watch gifted to Pakistan for three years, Imran rushed to declare this item in his tax returns for the financial year 2020-21 only when his retention of Tosha Khana items became the biggest scandal corruption scandal in the country.

Imran Khan did not mention any of the retained Tosha Khana gifts in his returns filed for the financial years 2018-19, 2019-20, and 2020-21. Khan’s wife Bushra Bibi did not file any return during this period. In fact, Bushra Bibi never filed a return in her entire life and she only got herself registered with the tax authorities of Pakistan in July 2021.

According to Cabinet Divisions documents Khan paid a total of Rs38.17 million against the gifts retained worth Rs142.0421 million. It is worth mentioning here that Khan also retained gifts worth Rs800,200 for free. The most important fact is that Tosha Khana can only maintain the details of the items which are handed over to the protocol officer of the Prime Minister. There are many gifts that are given directly to the Prime Minister and the protocol officer is absent. Such gifts cannot be recorded. A comprehensive list of Tosha Khana items being released by the Fact Focus today does not include the gold-plated Kalashnikov gifted to the former Prime Minister Imran Khan by Saudi crown prince Muhammad Bin Salman.

Retaining gifts received from foreign dignitaries by Pakistani politicians and officials have been a norm for a long time but in the case of Imran Khan and Bushra Bibi it is far beyond mere a norm. Imran Khan who heads Pakistan Tehrik-e-Insaf and is protesting against the newly formed coalition government after being unceremoniously removed from the office of the Prime Minister through a vote of no-confidence is likely to come under the scrutiny of the Election Commission of Pakistan and the courts as he has been retaining Tosha Khana gifts since 2018 but only mentioned them in his returns in 2021 that too after immense pressure from ordinary citizens and the opposition parties.

On March 18, 2022, Shumaisa Rehman had reported for Fact Focus that in November 2020, after news spread about retaining (and the subsequent selling) of some precious ‘Tosha-Khana’ gifts given to Pakistan by dignitaries of friendly foreign states by top government functionaries, a citizen Rana Abrar Khalid filed a Right-to-Information application to the Cabinet Division requiring details of the ‘Tosha-Khana’ gifts retained by the PM Khan and their value. However, the Cabinet Division refused to provide details. Consequently, Khalid petitioned the Pakistan Information Commission (PIC).

On January 21, 2021, PIC ordered the Cabinet Division to provide the details of the ‘Tosha- Khana’ gifts retained by PM Khan along with their value to the petitioner and also publish the same on the Division’s website.

It is important to note that when PIC sought comments from the Cabinet Division, the latter refused to provide the information without disclosing any reason. Under the law, a government department is bound to provide detailed reasons to the PIC in case it decides not to provide any information in response to an RTI application.

Fact Focus investigations reveal that when the Tosha-Khana scandal became the talk of the town, PM Khan submitted his annual returns for the tax year 2020-21 on September 30, 2021, much earlier than the dates of submission of his returns in previous years, and declared a “precious Tosha-Khana item” by mentioning an amount of Rs11.68 million.

Below is the detail of gifts received and retained by Imran Khan and Bushra Bibi, their value, and the amount paid by Khan to retain the gifts.

Previous Posts As Pakistan’s economy goes down, the donations to charities of Prime Minister Imran witness an exponential rise
Next Posts Earnings from Tosha Khana gifts were the biggest income for Imran Khan in his lifetime, tax record shows