As Pakistan’s economy goes down, the donations to charities of Prime Minister Imran witness an exponential rise 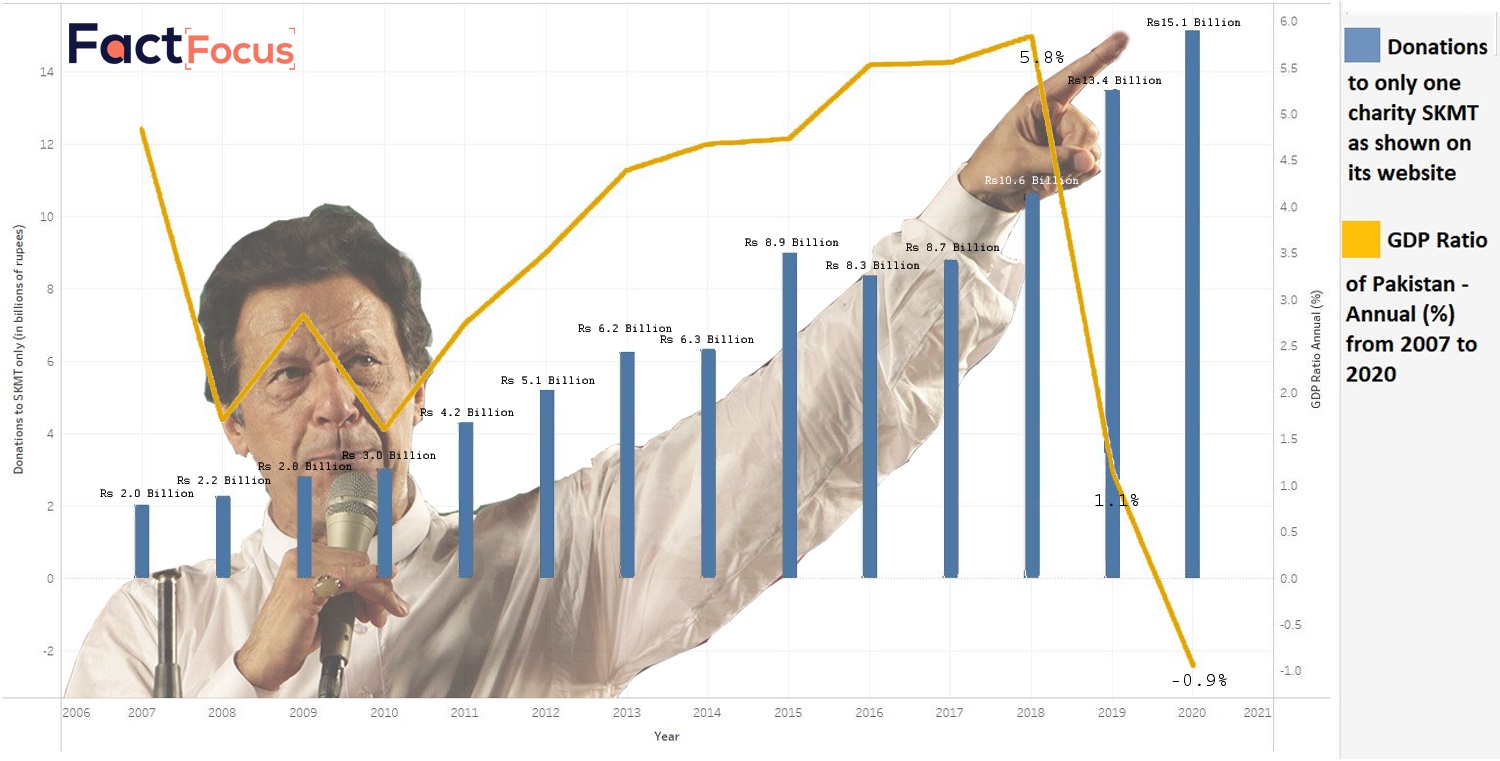 Shaukat Khanum Trust, NAMAL, and Imran Khan Foundation offices in the UK, the US, and Pakistan avoided sharing details of donors despite repeated requests from Fact Focus

Despite operating in an economy on the brink of collapse with rising inflation and a GDP ratio dropping to 1.2 at present from 5.8 in 2018, the income of the charities run by the Prime Minister Imran Khan continues to increase exponentially during his years in power.

Not only this, two charities of Imran Khan stopped filing mandatory annual statements in the UK and the US since the time he became the Prime Minister of Pakistan for unknown reasons.

Consequently, the United States revoked the tax exemption status of the Imran Khan Foundation in May 2021.

Looking at documents and comprehensive data collected from three different countries by filing freedom to information requests in the UK, requesting the charities directly in the USA, and by examining the records of annual filings of charities in Pakistan, it becomes clear that the annual revenues for Prime Minister Khan’s charities have more than doubled ever since Pakistan Tehreek-e-Insaf (‘movement for justice’, PTI) took control of, first, the provincial government in Khyber Pakhtunkhwa (KPK) in 2013, and subsequently the federal government in 2018.

As these charities amassed wealth, their network in the US, UK, and the Gulf countries also grew. Two of Khan’s charities Namal College (Namal Knowledge City) and Imran Khan Foundation have stopped filing annual statements to their respective government authorities in the UK and the US, resulting in Imran Khan Foundation having its tax-exempt status revoked by the Internal Revenue Service (IRS) in the US on May 15, 2021. The UK Charities Commission has confirmed this to Fact Focus in writing whereas the IRS website confirms the revocation of ‘Imran Khan Foundation’, one of the leading charities of Mr. Khan.

Not only this, serious irregularities have been reported by media while going through a list of donors to Mr. Khan’s political party ‘PTI’. PTI was forced by the country’s Election Commission of Pakistan to submit a donors list of the party to justify the expenses made by the party during different election campaigns. Some of the donors in this list when were contacted by Fakhar Durrani of The News confirmed in writing that they had donated to a charity of Mr. Khan and not to his political party.

The Shaukat Khanum Memorial Trust (SKMT) which runs cancer hospitals and research centers in Lahore and Peshawar in Pakistan, had been receiving donations from abroad ranging from one billion to three billion rupees until 2011, the year when the country’s powerful military establishment began to openly support Mr. Khan’s political party to bring it to power. The donations to the charities started going up. Only SKMT collected PKR 8.9 billion in 2015, PKR 8.3 billion in 2016, and PKR 8.7 billion in 2017.

However, donations nearly doubled again in just another three years after Khan’s party rose to the power in the center in 2018 in addition to making governments in three out of the total four provinces of the country and he became the Prime Minister in August 2018. In 2018, the total SKMT donations rose to 10.6 billion rupees. In 2019, total donations climbed an additional PKR 3.2 billion and finally landed at a whopping PKR 15.13 billion in 2020. These figures represent worldwide collections of donations for only one charity SKMT.

Graph showing year-over-year worldwide donations collected by Shaukat Khanum Trust in blue bars and GDP growth ratio in orange line. (From 2007 to 2020) [[Hover the mouse over the graph line to check the values and details every year.]

While many overseas donors were left wondering if their well-intentioned contribution to a cancer charity has been diverted to Khan’s political activities, Khan’s wealthy financiers might be availing the double benefit of under-the-table yet tax-deductible political contributions. This is a feat achieved by routing money intended for Khan’s party through his US charities. One of the donors from the list, Mumtaz Ahmed Muslim has recently in October 2021, been awarded a multi-million dollars contract to build a luxury hotel in a popular tourist destination in Pakistan’s Northern areas, Nathiagali. This fact is reported in Daily The News of Pakistan a few days back. According to this The News story, the ECP report had revealed that he gifted $24,979 to PTI and was also named by the Federal Investigation Agency (FIA) in the list of Pakistanis who own properties in the UAE. The International Consortium of Investigative Journalists (ICIJ) recent revelations with the Pandora Papers also mentions Mumtaz Ahmed Muslim’s offshore company, Dreshak Security Solutions Inc.

An examination of the record of Mr. Khan’s other charities apart from SKMT found serious issues. Financial records of Namal Knowledge City which is registered as ‘Namal College’ in the UK and as ‘Friends of Namal Inc’ in the U.S. Khan’s Namal College project has not submitted any tax returns to the authorities in the UK since 2018, the year Khan became the Prime Minister. It is important to mention here that SKMT which works in the UK as “Imran Khan Cancer Appeal” and is managed by the same team of managers and accountants submitted all its returns.

On the UK Charity Commission’s (UKCC) official website it is clearly stated with a red alert sign that the organization Namal College is 807 days (on January 15, 2022) overdue in charity reporting. In a written response to Fact Focus on January 11, 2022, in response to a freedom of information request, UKCC confirmed this fact and also provided some previous statements of Namal College which were not available on its website. On the other hand, in the United States, Friends of Namal’s federal tax-exempt status was automatically revoked for not filing a Form 990-series return or notice for three consecutive years on May 15, 2019. This status of exemption was reinstated later in case Namal. However, returns of Namal for the year 2018 onwards are not available on the IRS website and no person responds to phone calls and messages if the number given of the old returns is dialed. Throughout this time, Namal Pakistan reached PKR 185 million in 2018 and only exponentially rose to PKR 1.4 billion in 2020 (showing an increase of 700%).

In the case of the Imran Khan Foundation (IKF), the organization’s federal tax-exempt status was revoked on May 15, 2021, for not filing a Form 990-series return or notice for three consecutive years.

This situation is making things dubious. No one responds to calls or messages from the U.S. number given on the old returns of IKF. A representative of IKF in its Pakistan office while speaking to Fact Focus stated that IKF has closed down its operation. However, it is interesting to see that the charity continued to receive donations and file its annual statements to the tax authorities in Pakistan. The annual statements of these organizations obtained from Pakistan show that IKF received PKR 126 million in 2018, PKR 314 million in 2019, and only PKR 13 million in 2020. The annual return of IKF for the year 2020 submitted in Pakistan shows an administrative and management expense of more than PKR 1 billion. This documented fact belies the claims made by some of the officials of administrative office of the Imran Khan Foundation and Namal.

The Imran Khan Foundation’s website is non-functional but according to their most recent post on the Facebook page from Jan 22, 2020, IKF signed a Memorandum of Understanding with Akhuwat Foundation, a financial aid service with a total disbursement of PKR 130 billion. This again belies the statement of the IKF Pakistan representative that for now, the IKF has become dysfunctional. However, it has gone unreported in local and international news media that the organization’s tax-exempt status has been revoked in the United States and in the UK, it is registered as Imran Khan Relief Fund, where it is overdue in charity reporting by 930 days on January 15, 2022.

The last of Khan’s charity organizations of concern is Al-Qadir University Trust (AQUT). His wife Bushra Bibi is one of the trustees of this crucially imortant project. Registered in Islamabad, Pakistan in 2019, it was created to align with the prime minister’s aspirations for imparting spiritual knowledge through standardized education so the people can be “saved” from the Western culture which clouds the younger Pakistani generations’ minds. Official documents show that AQUT was officially registered in December 2019 but interestingly work on the site of the construction of a university building in Jehlum (a city 70 miles in South of the country’s capital Islamabad) was almost completed by that time.