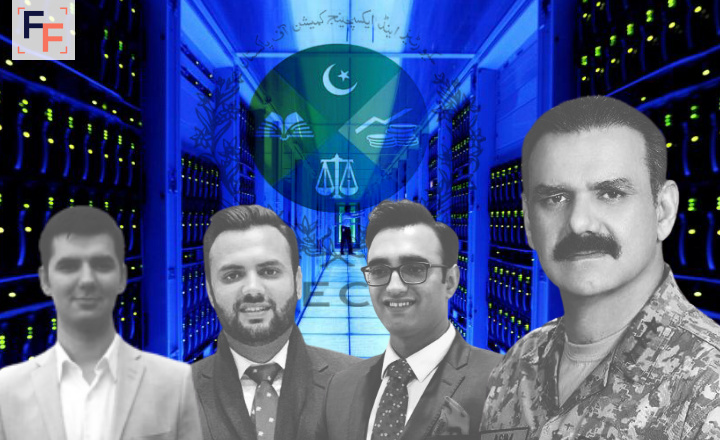 Digital footprints of the official website of the Securities and Exchange Commission of Pakistan (SECP) show that someone within SECP deleted the online records of five of six companies owned by Asim Saleem Bajwa’s family members after FactFocus started investigations into the assets accumulated by the family during the retired general’s military career.

The online records of the five companies were restored on the SECP website weeks later, after the tampering was reported by FactFocus on Thursday, Aug. 27. The government agency is responsible for regulating all companies in Pakistan and its work is expected to be independent of political influence.

SECP Chairman Amir Khan declined to comment when asked if he knows who changed the records on the website and whether that person was ordered to make the changes.

On July 21, FactFocus began to make photographic copies of SECP website pages that included records of the companies owned by the sons of Asim Bajwa in Pakistan and other countries. Original images of some of the records, the digital footprints, were to be used as attachments so readers could view the information and verify the dates of capturing of digital evidence by checking the ‘properties’ of the files.

But sometime during the national holiday weekend of Friday, July 31 to Sunday, August 2, while people were celebrating the Eid-ul-Zuha religious festival, someone at SECP was busy deleting the online record of companies owned by Bajwa’s sons: Muhammad Saleem Bajwa, Eusha Saleem Bajwa, and Azib Saleem Bajwa.

On the following Monday, August 3, the first working day after the Eid holidays, the Fact Focus team observed the deletion of the records of companies owned by the Bajwa sons. Fact Focus checked the SECP website time and again from different computers and locations around the world. All records of these companies were gone. The SECP website provides details of the directorship of the companies which was deleted.

Fact Focus continued to save the digital footprint. The records remained missing until Friday, August 28 in Pakistan, several hours after FactFocus published its story on the Bajwa family business empire and it began circulating on social media.

The story specifically described the tampering of data on the SECP website.

SECP website screenshots for the record of company “Mochi Cordwainers” as on August 3 and on August 28. (Original files can be checked after downloading the ZIP folder from the link ‘Complete Record’ at the end of the story)

When reminded that as chairman of the commission he was also the chief spokesperson of the SECP, and that questions were specifically about him, Khan continued to insist that Fact Focus contact the media section of the SECP.

Fact Focus asked Khan again whether he was aware of any such changes in the record, or whether he had ordered an inquiry after reports of record tempering on Thursday, August 27. Khan replied that he would forward Fact Focus’s questions to the concerned department and someone from the media section would respond. “We will certainly respond to your queries,” Khan said. Despite repeated reminders to the chairman, there has been no response forthcoming whatsoever.

The questions we asked were:

•           Did Lt Gen (R) Asim Saleem Bajwa or any of his associates ever contact you or any other top official of the SECP about the deletion of these records?

The five companies whose data was deleted from the SECP website were:

Silkline Enterprises (Pvt) Ltd is the sixth among those Bajwa family companies which were listed on the SECP website but its data remained on the website throughout. This was the only one which belonged to his brothers. The rest belonged to his sons.

SECP website screenshots for the record of company “Scion Builders and Estates” as on July 21, August 3 and August 28. (Original files can be checked after downloading the ZIP folder from the link ‘Complete Record’ at the end of the story)

Here is how the SECP is designed to work:

Companies Registration Offices (CROs) work as the regional, subordinate departments of the SECP, the central regulating body where companies are actually registered. The regional CRO offices are based in Islamabad, Peshawar, Lahore, Faisalabad, Multan, Karachi, Quetta, Sukkur, and Gilgit. Each regional CRO can only make changes to online records of companies registered within its geographic jurisdiction and not to records of any other CRO.

Note: Fact Focus has maintained digital footprints in all the formats that can be forensically examined by anybody. Fact Focus has uploaded evidence of step-by-step tampering of some of the records in one format. Readers can examine the changes of records from the slides given in the story. Video files are not being uploaded. Readers can examine the original image files by downloading them from the link given at the end of the story.

SECP website screenshots for the record of company “Scion Builders LLP LLP LLP” as on July 21, August 3 and August 28. (Original files can be checked after downloading the ZIP folder from the link ‘Complete Record’ at the end of the story)

SECP website screenshots for the record of company “Advanced Marketing” as on August 3 and on August 28. (Original files can be checked after downloading the ZIP folder from the link ‘Complete Record’ at the end of the story)

Complete Record. This link leads to Google Drive folder. The folder has ZIP file as well as RAR file. Readers will have download either of these files on their computers and unzip them. After downloading and unzipping, original files can be examined.